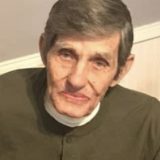 Gerald Sanders, 84, of Denham Springs, passed away peacefully Monday, January 4, 2021. He was a Master Brick Layer and an avid sports fan, especially the Saints and Peyton Manning. He served his country proudly in the United States Navy. He was a devoted husband, father, grandfather, brother and friend. He will be missed dearly by all who knew him. He is survived by his beloved wife of 53 years, Shirley Walker Sanders; his grandson that he was so proud of, Dylan Sanders; sister, Linda Sanders Gallino; as well as numerous nieces and nephews. He was preceded in death by his son, Chad Gerald Sanders; parents, Alton and Annie Bell Sanders; sister, Jean Sanders; brothers, Billy and Irvin Sanders. Per the request of Mr. Gerald, there will be no services for him. Please share your condolences at .