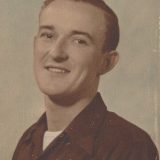 Elton was born on 10 July 1931. He had humble beginnings and experienced tumultuous times growing up in the midst of the great depression, losing his father early in life and growing up with nine siblings in the Mt. Hermon area of Washington Parish, Louisiana.  Elton was a country boy at heart who loved the woods, critters and Hank Williams with whom he liked to yodel along with. He will be remembered as having lived an extraordinary, generous and fulfilling life, full of curiosity; living Christian values in service to family, neighbors and strangers alike.

After graduating from Mt. Hermon High School, Elton married the love of his life Vertis Yvonne Benton of Livingston on February 13, 1954.  Elton served his country as an airman in the U.S. Air Force 66th Maintenance Squadron stationed in Sembach Germany from 1954-1955. Elton later worked and retired from the United States Geological Survey as a technician servicing monitoring equipment to collect valuable data to monitor numerous rivers and tributaries throughout south Louisiana. With the help of his long-time church community (Red Oak Baptist Church), his family sponsored on their farmstead re-settlement of two refugee families from Southeast Asia in the late 1970’s. These two families remained lifelong friends. Whenever, he or his wife Vertis encountered persons in need of a helping hand, they were there to lend a hand up to get people on their feet again. Their generous encounters with strangers, often in disregard to their own safety, are too numerous to count.

Elton was an avid gardener spending a lot of time in his often very large vegetable gardens full of butter beans, green beans, tomatoes, green onions, turnips, peppers and squash; with whom he shared all with friends and family members. He also raised cattle and shared the top shelf locally grown beef with family members. He also loved sweets particularly peppermint candy and ice cream that he always shared with his grandchildren and great grandchildren.

Elton was also a collector of all things mechanical on the farm and loved books about wild birds. He was an avid bird watcher setting out feeding stations and birdhouses too numerous to count.  He passed his passion for birding on to his children and grandchildren. Elton was also curious about the world and was an avid traveler with his beloved wife Vertis. He saw many of the 50 United States and experienced the people and places of England, Ireland and Canada. He made numerous trips to Alaska to visit family with his beloved Vertis driving the Alaska highway all the way from their Louisiana home with travel trailer in tow. He loved being in nature and watching wildlife in awe of nature’s bounty.