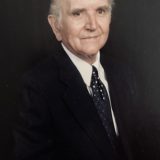 Dr. Robert Joseph (“Bob”) Fanning was born in Cleora, Oklahoma on October 23, 1925 and entered his heavenly home on June 25, 2022 at the age of 96.  Although a native of Oklahoma, he was a longtime resident of Baton Rouge.  Dr. Fanning grew up in Copan, Oklahoma, the son of Edna Hardy Fanning and Abe Fanning, a school principal. Being the second oldest child in a poor family of four children during the depression and dust bowl of the 1930’s instilled in Bob a fierce desire to obtain as much education as possible, and make the most of it. Thus, he graduated from high school in 1942 at the age of sixteen, and enrolled at the University of Oklahoma in Norman.  Having decided not to wait on Uncle Sam to select which branch of the service he would be compelled to join after graduation, he enlisted in the Navy and active duty was deferred until graduation in 1945.  Upon receipt of his Bachelor of Science degree in chemical engineering, he was assigned to the battleship USS Alabama.  He spent many beach vacations returning to the Alabama in Mobile harbor, pointing out to his children and grandchildren his bunk (which actually resembled a hammock), and the engine room where he worked without ear protection.  He was always convinced this led to his hearing loss!

His active duty was spent off the coast of Bremerton, Washington, all in preparation for the invasion of Japan, which the sailors presumed would occur sometime in October, 1945.  He remained forever grateful to President Truman for the decision to launch atomic bombs in August, 1945, resulting in the surrender of the Japanese, and eliminating the need for invasion.

After the war, Bob enrolled in the University of Missouri to pursue his master’s degree in chemical engineering.  He was always proud to remind his family that the income from the GI Bill not only paid his tuition and personal expenses, but allowed him to save money for the first time in his life!  After working for Phillips Petroleum, Bob returned to the University of Oklahoma and completed his Ph.D. in chemical engineering. His dissertation was entitled “The Dynamic Heat Transfer Characteristics of a Continuous Agitated Tank Reactor”.  To this day, no members of his family have any idea what that means!  It was Bob’s desire to stress his belief in the importance of education by paying the entire cost of his children’s and grandchildren’s college educations so they graduated completely debt free.  Additionally, all four of his grandchildren obtained their masters’ degrees just so they could impress their Poppie!

He joined Ethyl Corporation in Baton Rouge in 1964.  Although a huge OU fan, he was a devoted, adopted son of LSU, having served as an adjunct professor there, and always rooted for the Tigers, even when their opponent was his beloved Sooners.

Bob is survived by his daughters, Martha Hand (Gary) and Carolyn Ott (Tommy); his four grandchildren, Jeffrey Philip Lahr, Erin Lahr LaGroue; Melanie Hand Lauderdale and Adam Robert Hand; and six great grandchildren—Camryn, William, Ryann, Spencer, Gray and Nicholas.  He is also survived by his favorite nieces and nephew, Cheri Yost Clark, Julie Pickett; and Jeff Fanning. He is preceded in death by his wife of sixty-eight years, Jean Chouteau Fanning, his parents and all of his siblings.

The family offers special thanks for the caring attention and devotion shown to our Dad by his wonderful caretakers: Brenda Brumfield, Bernice Williams Johnson and Betty Caddo.  You are all three angels on earth!  Bob was a longtime member of Broadmoor Methodist Church, as well as his beloved Lamplighters Sunday School class.