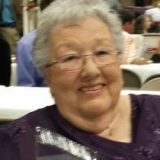 Peggy Ann Navarre Avery, 85, a longtime resident of Ponchatoula, La, died peacefully Friday, July 15, 2022, surrounded by family at Harvest Manor Nursing Home in Denham Springs, La. Peggy was born in Donner, Louisiana September 1, 1936, to Adley and Mary Boudreaux Navarre.  She graduated from Ponchatoula High School and enlisted in the U. S. Air Force.  While serving in Hawaii, she met the love of her life, Rufus Avery, who she later married. They resided in Georgia before returning to Ponchatoula where they raised their family and were active members of the community.  She was a member of the Ponchatoula Methodist Church, and the Community Garden Club.

The funeral will be a private ceremony with only close family members present.