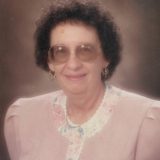 Cecilia Reeves of Denham Springs, Louisiana went to be with her Savior Jesus Christ, on July 25, 2022 surrounded by family at her side.   She was preceded in death by her parents, three sisters, one brother, her eldest son Edward Lee Reeves Jr. and one grandson Anthony Swetland.

Cecilia was born on November 7, 1938, in Whiteville, Louisiana to Mark Luke and Elsie Marie Andrepont. She grew up in Baton Rouge, Louisiana with her two brothers Andrew, Clifton and three sisters Louise, Theresa, and Rita.  She is survived by her loving husband of 65 years, four of her five children, and many grandchildren and great grandchildren.

On February 2, 1957, she married the only love of her life, Edward Lee Reeves, Sr.  Together they raised five children, Eddie Reeves; Dianne Rheams, husband Larry; Michael Reeves, wife Rhonda; Sandra Swetland, husband Don; and Jeff Reeves, wife Lisa.  She loved her children and dedicated her life in raising them to love God, work hard and care about others.