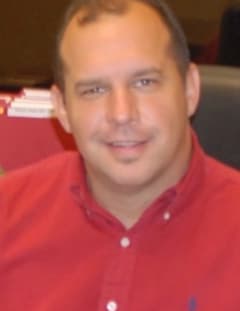 Byron Ray Simpson, 53, of Bellevue (Davidson County), TN, died on Friday, November 15, 2019. He was born April 24, 1966 in Baton Rouge, LA where he graduated from Baton Rouge Magnet High School in 1984. Byron studied music composition at the University of Southern California and earned a BA with the class of 1996. He graduated with a Juris Doctor degree from Pepperdine University School of Law in 1999. During his time in California, Byron worked as a writer and actor: His best-known credits include writer on the Walt Disney animation screenplay The Rescuers Down Under and writer and soundtrack credits for the animated television series Timon and Pumbaa. Byron once wrote ~ and repeated often ~ that he felt most like himself when riding in the car with his sons or sitting at the piano. Byron started his family during the California years. Dillon, Noah and Bennett were still very young when Byron and Kelly relocated to Tennessee. Byron served as an attorney in both Williamson and Davidson Counties in years past. Others familiar with Byron in recent years, though, knew him best as the concerned, direct and compassionate voice that guided hundreds - and likely thousands - of people suffering from addiction out of a maze of confusion and into healing. The consummate professional, he valued and practiced integrity and respect. He was an avid volunteer for the Tennessee Lawyers Assistance Program for a number of years. He is spoken of highly by colleagues as much as by those whose lives he helped save.
Byron also continued to create throughout his life. He enjoyed his seasons as a member of the Nashville In Harmony city chorus. He was in rehearsal for an upcoming play and in the midst of recording an album at the time of his unexpected death. He made time to write and to meditate, besides being extremely well-read. He was always well-aware of culture and current events. But his overriding passions were his relationships to family and friends.
Byron is survived by his beloved sons Dillon Simpson of Denver, Colorado, Noah Simpson of Knoxville, TN; and Bennett Simpson of Franklin, TN; parents Melvin Simpson and Bonnie Parr Simpson of Baton Rouge, LA; ; brother Brent and wife Connie Simpson, and nephew Max Simpson of Prairieville, LA; devoted friend James “ Jim” Ramsey of Nashville; co- parents Kelly and Chris McElhiney of Franklin, TN; his longtime pet cat, Cairo, and many beneficiaries, colleagues and friends. Byron was preceded in death by his paternal grandparents John and Hilda Simpson; his maternal grandparents Nelson and Elaine Parr. Remembering Miss Pauline Ramsey who Byron nurtured and cared for until she passed away in April. Please note that there are two memorial service planned. The first service is on Friday, December 6th at Lanier Baptist Church, 4851 Lanier Drive in Baton Rouge, Louisiana, Visitation at 5:00pm followed by the service at 6:00 pm. The second service will be in Nashville, Tennessee on Sunday, December 15th at Harpeth Hills Memory Gardens on Highway 100. Visitation begins at 1:00 pm followed by the service at 2:00 pm.

Please share a condolence, photo or memory of Byron. We welcome all condolences that are positive and uplifting that will help family and friends heal.