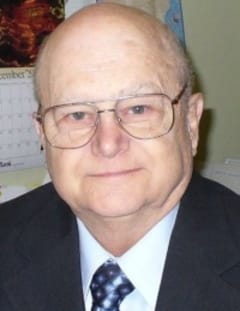 Don Hamilton Strobel, a true Yankee Doodle Daddy, was born on the 4th of July, 1936, in New Orleans, to George and Mary Lillian Hamilton Strobel, and died December 3, 2018, at The Guest House in Baton Rouge after a long battle with frontotemporal dementia. He was a very independent (and some would say stubborn—he would say “right”) child and young man who graduated from Rugby Academy in New Orleans, and LSU in Baton Rouge. Don’s career with the US Department of Labor, Wage and Hour Division spanned 32 years, after which he established his own business, Labor Consultants Central, where he continued his work as a labor law consultant for over 20 years. He was a resident of Watson, and a member of Live Oak United Methodist Church, having served many years as treasurer, board member and Sunday School teacher. He was a co-founder, with Mark Gunter, of the Bread of Life Library, which mailed out thousands of Bible study tapes all over the world. He was an avid hunter and fisherman since childhood, and enjoyed farming and raising cattle. He is survived by his wife of 58 years, Shelly Jones Strobel; son, Christopher W. Strobel, daughter and son-in-law, Mary “Mimi” and Bill Hagan; grandchildren: Christi Gautreau and her husband Mitch, Rachel Taft, Mickie Jones and her husband Gary, Katie Hagan, and Jonathan Hagan; a sister, Colleen Olney; an aunt, Betty Hamilton Hughes; and great grandchildren: Noah Gautreau, Jonah Taft, and Charlotte Jones. He is also survived by those to whom he served as “honorary” Dad: Sharon Parker Gunter, Mari Arnett McPherson and her daughter Lenai McPherson, and Michelle “Missie” Spring Scivicque. He was preceded in death by his parents and grandchildren Penn and Emily Hagan. The family would like to express their appreciation to the staff and caregivers at The Guest House, who provided continuous and loving care during his final days, and to family and friends for their expressions of sympathy and support. A memorial service honoring his life will be held Saturday, December 8 at Live Oak United Methodist Church, officiated by Dr. Mark Crosby. Visiting hours from 12pm until 2pm, with the service to follow. In lieu of flowers, the family would appreciate donations to the Live Oak High School scholarship fund, P.O. Box 590, Watson, LA 70786, or Live Oak United Methodist Church Building Fund, PO Box 709, Watson, LA 70786. Please share your condolences at www.sealefuneral.com.

I'm so very sorry for your loss of such a Family man and for all of those who he touched and will miss him, there is a very comforting message of hope, since I get a sense, that his Family is spiritual. What I am about to share with all of you, comes from Gods word the Bible and really from Gods Own Son, Jesus Christ. We find Jesus Christ speaking about a very promising or rather a Gaurrantee, that is found in John 5:28,29 to where he is giving each of you a preview of what is to come, in the future. We find him here speaking about him Faithfully carrying out a resurrection, " Which means, To stand up again" and so this will have a major impact on your lives, because what he says in John 5:28,29 in part is Do not be amazed at this, for the hour is coming in which all those in the memorial tombs will hear his voice and come out. So in other words, all of those who have died, will be raised up. Now you maybe wondering, " Where will they be brought back to?" Well, Gods word the Bible doesnt leave us in the dark, so to speak. For us to know that answer, we need to look into the scriptures and at Psalm 37:29 says: The righteous will possess the esrth and they will live forever on it. Some translations will say something a little different, but the message is the same. So may these words bring lasting comfort to your minds and just know, that when he is brought back to life, he will look for each of you and so let this hope ( Roman's 15:4) lead you to find more answers about the future at JW.org..
- Arthur
Don Strobel was a great friend and a good man, who had the good fortune to marry into the Underwood-Jones clan. He married Shelly Jones, my cousin and one of the sweetest women on earth. Don was a smart man, and married a smart woman, and they gave birth to smart children whom I love dearly. Along with all this smartness was mixed a healthy sense of humor, and I treasure the memory of every laugh I've ever heard from this family. Don was a practically formidable chess foe, and I dearly relish finally being able to force him to resign one time. Let's not speak of how many games that took over ever so long a time period . Don was a partner with me in spiritual growth when I was a young man starting my own family. Don could be an abrasive cuss, as anyone who truly knew him might testify, but I've seen his eyes well up with tears over his love for Christ and his desire to reach and teach people about God's grace. I cherish the many hours spent round his kitchen table with Don and Shelly and my wife Susie. We talked, laughed, planned and lived together in those moments. The last time I saw Don he was still at home, and I was visiting, with some of my family, for Christmas. He gave me grief over the fact that I had allowed my curly gray beard to grow long and wild. When it was time to part, I forced him to give me a hug after long and ardent protestations from him. I am glad that the last contact I had with my old friend and cousin-in-law was a loving embrace. To Shelly, Christopher and Mimi and all their family and loved ones I wish long and happy lives filled with great memories and laughter, and no more than fleeting moments of grief. Don, thank you for your legacy, and may you rest in peace.
- Mark Gunter