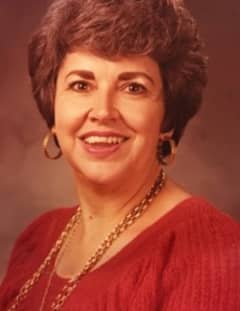 Elizabeth “Jeane” Hunt Leach, 93, of Baker, LA, passed away on Monday, January 13, 2020. Jeane and her sister, Jeune, entertained the WWII troops at Selman Air Field in Monroe. Jeane was also named as the only ever Miss Selman Field. She and her sister also started the Jeune and Jeane Hunt School of Dance in West Monroe and Denham Springs and eventually Jeane maintained the Jeane Hunt School of Dance. She also worked as the Kindergarten Director for First Baptist Church, Denham Springs for 22 years before starting her next career as a tax preparer for H & R Block for the next 24 years. Visitation will be Sunday, January 19, from 12 p.m. until service at 2 p.m. Burial will follow on the grounds of Greenoaks Memorial Park, Baton Rouge. Pallbearers will be Shelton Roark, William Windsor Pipes, Barry Pipes, Philip Roark, Jamie Hill, and Coleman Leach. Honorary pallbearer will be Jay Lilly. She is survived by her children, Elizabeth “Libby” Leach Neighbor and husband, Charles, and John Michael Leach and wife, Larinda; grandchildren, William Brandon Richard and wife, Kelsi, Elizabeth Christina Neighbor, Rebekah Leach Scarola, Hannah, Haley, and Holden Scarola, and Vivian Richard who is lovingly expected in April. She was preceded in death by her husband, Coleman John Leach; parents, William King Hunt and Edith Hunt Linder; sister, Edith Jeune Pipes and husband, Donald; and daughter-in-law, Anne Lorio Leach. Jeane was a loving mother, grandmother, and friend. She will be missed dearly by all who knew her. Please share your condolences at www.sealefuneral.com.

Mrs. Neighbor, I wanted to offer you my deepest condolences at the passing of your mother. You and your family are in my prayers.
- Delbert Lewis