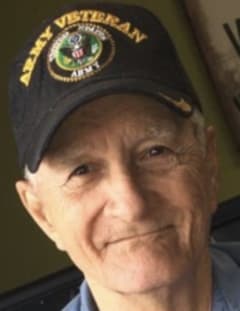 Ferrell Thomas Morales, known to his friends and family as "Joe", passed away Wednesday, October 7th, at the age of 85. A resident of Walker, he was a native of Plaquemine, Louisiana. He strongly supported medical research, and has donated his body to the LSU School of Medicine. A beloved husband, father, grandfather, and great grandfather, he is preceded in death by his wife Florence Jane Segler, his parents, Vitale Morales and Noelie Navarre, his brothers Roland Joseph, Calvin Paul, Leslie Peter, and Claude John Morales, and by his sisters Vivian Brocatto and Verlin Kleinpeter, by his son Ferrell Thomas Jr "Tommy" Morales, and his daughter Tammy Brookhart. He is survived by his daughters Penny Morales, Laurie Hill, and Anna Lambert, and his sons, John Morales & wife Sherry and Joseph Morales, daughter in law Theresa Morales, and by his grandchildren Jerica Melancon, Dillan Moran, Paige Brouillette, Derek Morales, Kacie Hill, Justin Roddy, Jarrett Roddy, Jordan Lambert, Chris Morales, Stephanie Jones, Rachel Morales, Jacob Morales, Madison Morales, Cade Morales, and great grandchildren. He was called to active duty and served in Korea in 1957. He was a member of the American Legion Post 258 in Springfield, Louisiana. A memorial service will be held at Denham Springs Seventh Day Adventist church, 27206 LA-16, Denham Springs, La, on Sunday, October 18th at 2pm. The family will receive friends and family for refreshments immediately following the service in the church fellowship hall.

My thoughts and prayers are with all of you. Uncle Joe was a special man that will be remembered for his love of family, kindness, and sense of humor. Love to all my cousins. Betty Daigle
- Betty Daigle