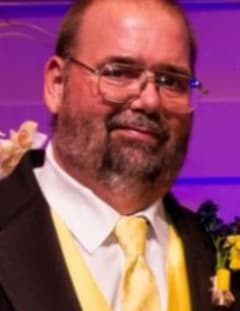 James Adam Bailey “Beaux” passed away Dec. 3rd, 2019, at his home at the age of 61. He was a longtime resident of Denham Springs and current resident of Port Vincent. He was a devoted fisherman and a dedicated handyman. A memorial service will be held at Live Oak United Methodist Church in the FLC in Watson, LA on Sunday Dec. 15th, 2019 from 2:00PM to 4:00PM. He is survived but his 6 children, Amanda Fay Bailey, Beaux Garrett Bailey, Heather Bailey Matthews and son-in-law Damon Matthews, Rhett Austin Bailey, Walter Adam Bailey and daughter-in-law Katie Bailey, Carl Gabriel Bailey, 7 grandchildren Alexis and Jandi Hughes, Kai And Gracelynn Matthews, and Jolene Bailey and her twin siblings that are on the way. His brother Michael Robert Bailey “Bobby” and sister-in-law Frances Bailey and numerous nieces and nephews. Proceeded in death by his father Walter Lee Bailey Jr. and mother Elizabeth Adams Bailey, his brother Thomas Lee Bailey, and his wife Melinda Leteff Bailey. Family request that all flowers be sent to Live Oak United Methodist Church, 34890 La-16, Denham Springs, La. 70706

Me and my PawPaw were very close. He was always there for me When I needed him. He loved to make jokes and play. It was always a good time when PawPaw was around. Everybody loved PawPaw. We would always go to Grand Isle for vacation every year and no where else. PawPaw love to take all the kids fishing or to the sand bar. He was very special to me. He let me drive the boat. We had the best time when pawpaw was there. He was a very good person. He cared for us, family or not, he cared. He loved us all. Love you PawPaw we all miss you!
- Kai
My PawPaw was a great fisherman and I wish I could fish with him a lot. I wish I was over there with him. My PawPaw let me drive the boat. Me and my PawPaw loved to go to Grand Isle. I miss you PawPaw and I love you. I was so glad that he loved everyone. Thank you for coming to my birthdays.
- Gracelynn
You never know the impact someone has on you and your life until that person isn’t there to answer when you call. This man here, the whole sense of the word man, had one of the biggest impacts on my life. Unfortunately he nor I knew it until now. This man treated me as his son, whether I was wrong or right, good or bad. He gave with everything he had and touched many people without ever asking for anything in return. I hope I can treat my kids as he did me. This man taught me more then he ever knew. And of course I wouldn’t tell him that, because he would just pick on me. But all you had to do to learn anything from him was just watch him for a minute. I promise you’d learn something, and I did just that. Beaux was not only a father figure for me, he was one of my closest friends. For the past several months, we talked at least once a week. I never imagined those phone calls would stop and how badly I’d miss them. I never got a chance to tell him, but I’ll say it now, I love you and you’ll forever be missed. Now save some fish for us! Oh and while we fish in the future. Don’t be messing with our hooks making us think we got a good when we don’t! Your favorite saying of mine was when some said “see you later”, you’d reply, “thanks for the warning.” Well here’s your warning, “We’ll all see you later.”
- Damon