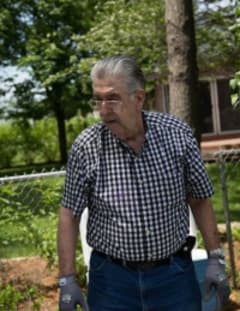 Obituary for Jerry May

Jerry Keith May passed away on Friday, November 20, 2020 at 4:54 pm in Lafayette, Louisiana, after a sudden illness.

To share the story of Jerry K May, “Maypop” to his family and friends, “JK May” to most everyone else, we must go back 77 years to when Jerry came into this world. Jerry was born to Idella Louise Devall May and Woodrow W. May on April 4, 1943, in Baton Rouge, Louisiana. Jerry would be 9 years old when he would meet the love of his life, Glenna Sue Simpson, as they were neighbors. It was love at first “break”, as Sue balanced on an old wooden sawhorse and then dared Jerry to do the same. He did, and did it better than she did, her response was to push him off the sawhorse and he broke his arm! In 1964, they would reconnect and continue the love that they shared and marry on Thanksgiving Day, 1965.

Jerry and Sue had 3 children and were married for 39 years when Sue passed away from breast cancer in 2005. Jerry was a 1961 graduate of Baton Rouge High School and went on to work for Great Lakes Dredge and Dock Company aboard The Conical, that worked to dig portions of the Inter-Coastal Canal and the Mississippi River during the mid-1960’s while courting his soon to be wife.

Jerry then went on to apprentice and work as a Machinist and Plant Operator at Allied
Chemical / Formosa Plastics as well as American Hoechst for years before moving into a different career path. He began working for Fibron Papermill Products of Vancouver, British Columbia and this led to Jerry to starting his own business, Service for Threading. He worked as an independent contractor / vendor rep for Fibron from 1988-2005, when he retired.

Jerry had many passions in his life; playing music, camping and attending Blue Grass Festivals with his wife Sue, brother Warren and his wife Jeanine, becoming a Ham Radio Operator (Call Sign N5CEV), as well as getting his hands on any new technologies that he could. Jerry was also known for sharing his wealth of knowledge, such as spending 4 hours telling one how a TV worked (old-School Style) or 3 hours teaching his daughter how to repair a carburetor for a 1982 Dodge Ares. Jerry and Sue both had a love for music, Jerry played an Upright Bass Fiddle named Hazel, guitar, electric bass, as well as any song that CCR ever made on his Radio Shack Cassette Tape Player. Though it has been over 20 years since Jerry played any music, he held a love for it until the end.

Jerry is survived by his son, Adam Keith May and Sheila Willis May, of Rockton, Ill.; daughter, Mona May Wright of Lafayette, La.; sisters Addie Brown and Margaret and Jimmy Wingate and brother Michael May, all of Baton Rouge. Three grandchildren, Clare and Evan Burnside of, Farmington, New York; Ezekiel John May of Rockton, Ill.; and Charity Wright of Lafayette, La. He is also survived by his long-time great friend and advocate Kate Zundel in addition to so many of his neighbors and friends from his many years of living in Denham Springs and Watson.

Jerry was proceeded in death by his eldest son, Timothy Wayne May; his father Woodrow W May; his mother, Idella Louise Devall May; his wife, Glenna Sue May; his beloved dog Pee Wee, his Brother Warren May; and his son-in-law Dr. John W. Wright.

In lieu of flowers, donations may be made as gifts to the Susan G. Komen Breast Cancer Foundation on behalf of Jerry and Sue May.

Visitation will be held at Seale Funeral Home, Denham Springs, Wednesday, November 25, from 8 a.m. until service at 10 a.m. with burial following at Devall Cemetery, Baton Rouge.

We all had a good meal, great conversation, and an all around good time when Jerry, Mona, Charity, John, Jennie, and Family came to Doug and my house. The menu was a Simpson family tradition of Tennesse Stew. We all enjoyed so much!
- Rose Simpson