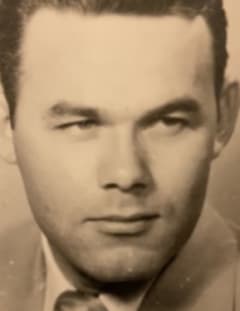 Oley L. Cross, a long-time resident of Denham Springs, and retired Allstate Insurance agent, departed this life on Friday June 19th, 2020 at the age of 97. He was a member of First Baptist Church of Denham Springs. Oley was born on February 5th, 1923 in Goshen Springs, Mississippi. He left his native state to attend Louisiana State University in Baton Rouge. He was called to active duty in April of 1943 after three years at LSU and ROTC. He was a member of Kappa Sigma fraternity. He completed basic training at Fort Sill Oklahoma and liaison flying school at Sheppard Field, Texas in 1944. He was commissioned a 2nd Lt. after OCS training and shipped out to the Island of Leyte in the Philippines. Later he was transferred to Manila on Luzon and flew a scheduled courier service. After the war, he completed his degree, returned to Mississippi and was later called back to service in June of 1951 for the Korean Conflict as a pilot. He flew combat missions as light observation pilot directing fire from the air. He also flew entertainers for the USO shows and negotiators to Pyongyang. His service as 1st Lt. was completed in February of 1953 and he returned home. He married Anita Joy Jordan on April 12, 1953, and they lived in Canton Miss., then Baton Rouge, and finally Denham Springs where he raised their three daughters. Oley was an avid golfer, hunter and LSU fan. He loved going to his hunting camp as “Uncle Oley” and gathering with his family and friends. He was known for his eternally positive outlook on life, his signature sayings, his many fascinating stories and joke telling. He was also a great musician and played the mandolin, guitar, ukulele, banjo, and fiddle, and was eager to play and sing at any gathering. He loved the outdoors, drinking a beer, and smoking a cigar and having “one more bite” of ice cream. Oley was a humble and good man, a devoted husband and father, who enjoyed all the truly simple things in life. He was loved and admired by all and will be missed dearly. He is preceded in death by his wife, Joy Cross, his parents, Evelyn and George Dewey Cross, and brother W.D. “Dub” Cross. He is survived by his sister Janelle Carter of Sandhill Miss., three daughters, Donna Camp Currier, Cathey Chustz and husband Steve, Brenda Wright and husband Rene; six grandchildren, Marla Wright, Dallas Wright and wife Jessica Scallan, Meghan Hanson and husband Tylor, Daniel Camp and wife Mary Davis, Stefanie Calverley and husband Steven, and Taylor Chustz; five great grandchildren, Rowen, Cate, and Carmen Wright and Steven and Elizabeth Calverley. The family would like to give special thanks to Sunrise at Siegen and Hospice of Baton Rouge staff for their exceptional care and to our cousin Ruffin Cross and his nurse Ashley for their care to our Dad. Private graveside services will be held by the family. Funeral arrangements by Seale Funeral Home.

To Ruffin, Donna, and family: I am very sorry to learn that Mr. Oley is gone. I have vivid memories of him sitting in the Bistro and keeping us company when I first started working at Sunrise. He loved to make us laugh, and we kept his cigars in the Concierge desk for him. What a grand old gentleman he was! I know you will miss him. You can all be proud that he was a serviceman for our country. We are eternally grateful. Your family will be in my thoughts and prayers. Take care of each other.
- Celeste Sanders