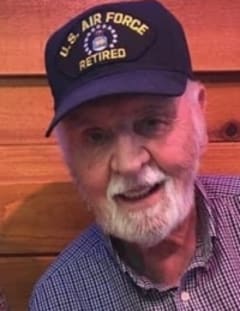 Robert Joseph "Pops" Ruttman, 87, native of Conshohocken, PA and resident of Walker, LA, was called by the Lord on June 14, 2020. He faithfully served his country in the United States Air Force as Staff Sgt. before retiring after 20 years in 1978. He later retired from Riverbend Nuclear Plant as a Burns Security Guard in the early 1990's. He then worked for and loved his days at Spectrum Environmental and then landed at Spectrum Water Technologies, retiring in 2014. Pops was extremely proud of his family, his Polish culture and serving as a USAF Veteran. He never met a stranger, loved sharing stories of his lifelong adventures and worldwide travels, and had a huge passion for LSU football. He enjoyed serving at Immaculate Conception Church as a Eucharistic Minister and member of the Men's Club. He was also a Third Degree Knights of Columbus. He is survived by his wife of 14 years, Sandi Poe Ruttman; daughters Cheryl Miller and Lorraine Harris (Ron); son Allen Brown; step-daughters Lynette Wilks (Mark) and Darlene Carpenter; brothers Joe Rakowski (Karen) and John Rakowski (Karen); sister Sue Milke (Ray); sister-in-law Rose Ruttman; grandchildren Treynor McAdams (Melisa), Tracy Brown, Lynee' McAdams, Elizabeth Miller, Joseph Miller (Kara), Nikki Brown, Daronda Johnson (Britt), Jolynn Reed (Scott), Lesa Cegielski (David), Jessica Staples (Jacob), Madelyn Wilks, Chase Carpenter, Brenan Padgett, Taylor Padgett; and numerous great and great-great grandchildren, and nieces and nephews. He was preceded in death by his mother Josephine Rakowski; sister Alice Custer; brothers Stanley Rakowski, Jim Ruttman, William Ruttman; son Tommy Brown; step-son James Padgett, III; first wife Martha Walcoveick Ruttman; granddaughter Cindy Brown; great-grandson Jasher Jones; and great-granddaughter Lauren Melchor. Pops was loved very much and will be deeply missed by all whom had the honor and pleasure of knowing him. Visitation will be at Seale Funeral Home in Denham Springs on Thursday, June 18, 2020 from 5-7 pm with services immediately following. Burial with military honors will take place at a later date. In lieu of flowers, donations can be made in his name to the American Heart Association.

Mr Ruttman, you were my other father, I will never forget the wonderful times in Italy. You and my dad keeping Cheryl and I in line. You are now in heaven but the memories are here forever. Rest in peace.
- Cathy