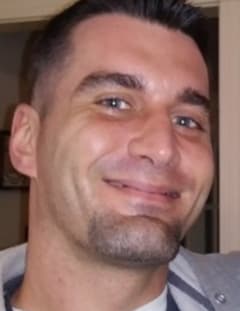 Mathews 26:41 ”Watch and pray that you will not fall into temptation. The spirit is willing, but the flesh is weak.” Timothy “Tim” Thompson passed away peacefully at Our Lady of the Lake Hospital on October 28, 2019 at the age of 33 following a long struggle with addiction. He is survived by his mother Lisa Jones and step-father Kirk C. Jones, father William R. Thompson and step-mother Mary Thompson, son Connor Thompson, and Connor's mother Tiffany Droddy, brother William J. Thompson, grandmother Phyllis Newport, aunts, uncles, and cousins. He was preceded in death by his grandfather Lawrence “Poncho” Newport, and grandparents Diana and Earl Bass. Tim was born on September 28, 1986 in Nuernberg, Germany U.S. Army Hospital and moved to Ft. Polk, Louisiana when he was 8 months old. He grew up in Watson, Louisiana and married Christin Wanker Graff. After divorcing, Tim moved several times but ended up in Baton Rouge to be closer to his work at Gerry Lane Cadillac where he was an automobile specialty technician. He will be remembered for his beautiful blue eyes, infectious smile, and talent of being able to fix anything. There will be a private memorial service held for family and close friends at a future date to be determined, and then he will fly to Pennsylvania to his final resting place with his grandfather, Lawrence “Poncho” Newport. A special thanks to his girlfriend, Trista Hughes, whose quick action of calling 911 saved him long enough to get him to Our Lady of the Lake Hospital where his family was able to tell him good-bye. Also a special thanks to Dr. Tonya Jagneaux, M.D., Katelyn, JP and the entire LSU-ICU team and staff for their kindness, compassion, and respect for Tim and his family. Tim's Aunt Janice Klinkiewicz “second in command” from Pennsylvania who was visiting Louisiana is greatly appreciated for never leaving his side. Everyone has their own journey in life. The Lord ended Tim's journey here on earth to give him and his family peace. To know him is to love him. Tim will be missed by all.

Prayers...we loved you Tim and you loved us. Always so polite and handsome, tall, gracious young man. I'm sorry you had to bare such pain. But never alone were you. Jesus was always there. My friend Lisa and best brother ever BJ my love, hugs and tears. Oh, he was also very intelligent. Baby boy Conor take the best of your Daddy and grow strong. He loved you so much. We already miss you. Love Mrs Donna..lol
- Donna
Im aware that y'all already know but i just wanted to express to his family how wonderful of a man and how much meaning he had in not only mine but my families life. He was not only a great respected man to My family as well as My sister, Trista Hughes. My daughter completly adored Tim and Connor's play dates. He will be definatly be missed and never forgotten. Our goofiness we shared was always an unbearable laughter. Always keep in mind well-raised of a man he was, and who did everything in his power to make everyone satisfied. I'm sorry for your loss
- Rebecca