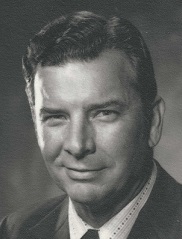 Walter Nelson Cosby, aged 95, a retired zone manager for Sears Roebuck & Co. passed away on Monday, April 19th, 2021 at Harvest Manor Healthcare and Rehabilitation facility in Denham Springs, LA.  Walter was born September 17th, 1925 in Hamlet, NC where his parents, Walter N. and Vivian (Porter) Cosby resided until their passing in the 1970’s.

As a young boy, Walter played football, baseball and basketball for Hamlet High School, which achieved state recognition by winning their baseball and football championships.  Walter entered the Army Air Corps in 1943 after graduating high school.  He served in the 500th Bombardment Group of B-29s.  His tour of duty lasted two and a half years primarily in Saipan and Iwo Jima.

After serving his country honorably, he returned to his home state of North Carolina to continue his education at Wake Forest University and University of North Carolina.  Walt married Lilian Maxwell on June 6, 1948 in Oxford, NC after Lilian graduated from UNC Greensboro.  Walt entered a young executive training program for Sears Roebuck.  He advanced rapidly into executive management and over the course of twenty years, was assigned to eight store management positions, including managing the Sears store on Florida Blvd. in Baton Rouge.

In 1972, he was promoted to Sears management over 40 retail stores and two distribution centers in Virginia, North Carolina, South Carolina and Tennessee.  Walt was extremely active in several civic organizations during his career.  He was a lifetime member of the Rotary Club, served on several hospital boards and was a member of the YMCA and Kiwanis.

He retired in 1980 at the age of 55.  He and his wife, Lil moved back to Louisiana to be closer to children and grandchildren.  For thirty years they traveled the country and the world extensively.  During their eighties, they retired to Colorado to spend the remainder of their golden years.  They were married.72 years.

Walt and his wife, Lilian, were members of the Episcopal diocese in numerous cities where he worked.  He took great pride in working with the diocese, helping to build two new churches after his retirement.

Walter was predeceased by his parents, Walter and Vivian Cosby, by his beloved wife Lilian who passed in Feb. 2020 and by his beloved granddaughter, Christin Claire Cosby, who passed in April 1998.  He is survived by two sons, Wayne and his wife Lulie along with grandson, Todd Cosby and wife Paige, as well as great-grandchildren, Tristin Cosby, Landon Cosby, Ava Cosby and Cruz Cosby; a son, Kelly and his wife Wendy along with Kelly’s daughters, Stacie Cosby Price and husband Jessie Price along with great-grandchildren Calvin Price, Elise Price and Teddy Price; Katy Cosby Woltmann and husband Joshua Woltmann with great-grandchildren, Caleb Woltmann and Ethan Woltmann.

Walt and Lil are finally together again, as they should be.