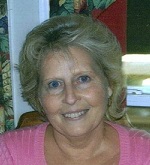 (Mary) Dolores Dibble Blanchard, 80, loving mother, family, and friend to all. She was born and raised in Simmesport, La. She loved dancing, and spending time with family, and get togethers. She was an excellent Cajun cooking queen. She took care of anyone that needed her to the best of her ability. She is flying high in heaven, and finally reunited with her loving mother which she loved tenderly every day of her life. Her prayers for all of us, especially to her patron saint, St. Jude, will be greatly missed. She is survived by her daughter, Priscilla Blanchard Jones Methvin, and fiancé, Frank Mullally, son, Randy Blanchard, and daughter in law, Rayette Lewis Blanchard, son, Sean Blanchard, brother, Leo Dibble and wife Sue Dibble, and brother, Terry Dibble and partner, Colleen Juneau, grandchildren, Kristen Jones Calvit, Cody Cutforth, Fred Calvit, Brandy Jones, Justin Methvin, and Blake Blanchard, and Georgia Langlois Blanchard, 8 great-grandchildren, and many nieces and nephews. She is preceded in death by parents, Alice and Willie Dibble, brothers, Lones Dibble, and Clarence Dibble. She is also survived by her loving dogs, Coco and Gabby, who were always there protecting her. She will always be with us in spirit. Visitation will be held at Immaculate Conception Catholic Church, on Monday, September 26, 2022 from 10AM until Mass of Christian Burial at 11AM. Burial will follow in Evergreen Memorial Park. Condolences may be offered at www.sealefuneral.com